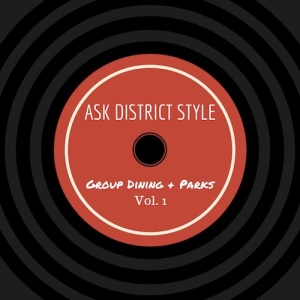 Got questions?  We’ve got answers!  In the inaugural version of “Ask District Style,” we tackle group dining and the best laid-back park in DC.

Q:  Where are the best places in DC for large groups to dine out?

A:  When it comes to finding restaurants for large groups, a lot of otherwise normally great restaurants in DC just won’t fit the bill. Some simply do not have the space, while others have potentially restrictive menu and fee requirements.

Likewise, there are some restaurants that primarily cater to large groups (you know who they are), but they’re probably not what you’re looking for in terms of quality cuisine.

With that in mind, we recommend Bistro La Bonne on U Street or Rosemary’s Thyme in Dupont Circle.  Neither require you to sacrifice quality food for your large group.

To make any large group dining event run smoother, suggest that your fellow diners bring cash with them as many restaurants limit the number of credit cards you can use for one bill.  Also, most restaurants will require a concrete number approximately a week in advance of your reservation, so it’s important to plan in advance when possible.  Most restaurants realize that numbers can change at the last minute, but we find it’s better to underestimate instead of overestimating numbers as there are almost always several last-minute cancellations.

Q:   Now that the weather’s nice, I’d like to find a nice, laid-back park in DC that isn’t too crowded.  Where do you suggest?

A:  DC has no shortage of green space but, once the weather warms up, you can sometimes be competing for space.

Our recommendation is Mitchell Park on S and 23rd St NW in Kalomara.  It’s just a short walk from Dupont Circle metro, but it feels like you’re not even in the city when you visit there.  Greenery, flowers, and benches abound – and, as an added bonus, the park is right near the Spanish Steps.

Email us at info (at) districtstyle (dot) net and your question might get answered in a future post.

If you have other suggestions for our reader questions, please comment below or join the conversation on Twitter.